Some Pros and Cons of TPO Roofing 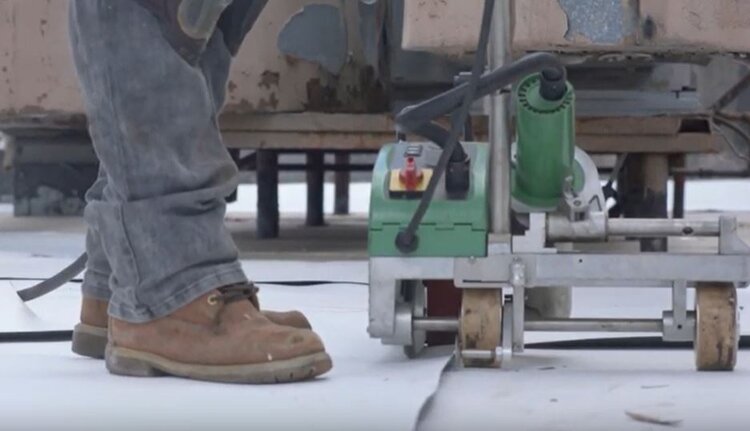 Thermoplastic polyolefin, or TPO for short, is a relatively new flat roofing material. TPO has been on the market for approximately 30 years and has found a niche as a material that’s easy to work with, economical, environmentally friendly, durable and energy efficient.

TPO’s main competitors are ethylene propylene diene monomer rubber (EPDM) and Polyvinyl chloride (PVC), 2 materials traditionally used on commercial roof replacement. Generally, TPO roofing has been found to be just as durable as PVC and EPDM, but is significantly less expensive to install. In fact, if you do some good research, a good local commercial roofing contractor will be able to tear off the old roof, repair any rotted wood, insulate, and replace the roof with a TPO membrane for cheaper than a traditional layover with EPDM or PVC. In the end with this approach, a building will be in much better shape due to reduced weight, proper structural repair, and in most cases, the improved insulation will allow a business to recoup the cost of the roof in energy savings within 3-5 years.

WHAT IS A TPO ROOFING SYSTEM?

Most contractors will talk about a commercial roof as a “system”. A traditional commercial roof was composed of rubber, in fact, TPO is one of many types of rubber, in this case a polypropylene and ethylene-propylene rubber. Being a rubber, this is what allows for durability, water resistance, and the ability to “melt” the seams together with hot air. The rest of the “system” comes from properly constructing or rehabbing the roof prior to applying the TPO to allow for proper structural support, energy efficiency, and removal of water.

1. AVERAGE COST OF A TPO ROOF

TPO is a very economical option for a business for many reasons. The most important, obviously, is cost. The average cost of a TPO roof installed can range from $5 to $10 per square foot with an average of usually $8 per square foot. There are a number of factors that can affect this price, but typically when compared to PVC or EPDM it will almost always be cheaper to install and likely will save more money in energy costs in the long run as well.

2. LIFE EXPECTANCY OF A TPO ROOF

TPO products have been in production since the 1980s, but the first rolls of TPO roofing membrane were not produced until 1989. TPO roofing did not reach mainstream status until the 1990s and improvements to the technology continue to be implemented even today. That being said, the life expectancy of a modern TPO roof is approximately 25-30 years. The life expectancy can be influenced by a number of factors, including; location (amount of sun and/or freezing), skill with which the TPO membrane was applied (especially at the seams), presence of cracks or leaks, and if it was a fresh installation or a layover.

3. A TPO ROOF IS ENERGY EFFICIENT

Likely the biggest advantage of a TPO roof is that it will pay for itself in 3-5 years. A typical commercial building is extremely large and old insulation, cracks, leaks, and rotting wood can all lead to massive heat loss. Not only that, but in comparison to other types of flat roof membrane, a TPO roof is typically bright white and UV resistant, these properties allow it to reflect heat and sunlight adeptly. Combined, a business can easily save thousands of dollars per year in energy costs and easily recoup the price of the roof replacement. In fact, TPO roofing exceeds EPA Energy Star requirements and the Cool Roof Rating Council give it high marks overall.

There’s not much than can affect on a TPO roof. If installed properly, TPO roofing is resistant to water penetration and mold growth, it’s easy to clean, dirt doesn’t stick, and it’s generally resistant to tears and punctures. Best of all, it’s very flexible so in cold weather it can generally flex with freezing and thawing as well as well as any settling of the building structure underneath.

1. TPO ROOFING HASN’T BEEN AROUND LONG

Being a relatively new technology isn’t always a great thing. In this case, we don’t know much about TPO roofing on a large scale. While it’s generally rated for a 25-30 year lifespan, some sources will quote much less, as low as one third, due to many different variables. Factors such as extreme heat and sunlight in the southwest United States, extreme freezing and thawing up north can impact and reduce the lifespan of a newly installed TPO roof.

2. NOT ALL TPO MATERIAL IS CREATED EQUALLY

In addition to the weather, and considering that TPO is a newer technology, it’s been found that manufacturing differences play a huge role is the longevity of a new TPO roof. People frequently assume that a roll of thicker membrane is better, but the membrane will usually wear out in the same amount of time. As technology evolves, mixtures and blends of materials used to make TPO change as well as the suppliers of the materials themselves. This makes it much more difficult to put a firm number on life expectancy. And even for the ease of installation, a roll of TPO may only be 6-8 feet wide and 100 feet long, so there are many seams that must be heat sealed correctly for the roof to reach its full potential.

So, there are a lot of benefits but some key disadvantages to putting a TPO roof on your flat roof commercial building. But taking the disadvantages into account, there’s still a reason why TPO roofing has grown in popularity so wildly in such a short amount of time.

Just like anything else, you’ll need to be smart about the decision, if your business is in located in an area without the major weather extremes, and you properly research the reputation and manufacturing techniques of your chosen brand, TPO is a great choice and will be for many years.

For more helpful information, check out the rest of our blog posts.

About Us Across the Web